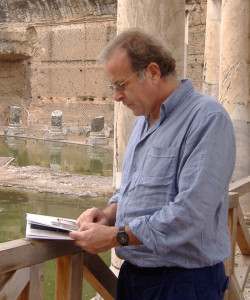 The light component is important in a place of such exceptional historical and artistic value as Palazzo Barberini. The study of light in the Pietro da Cortona Room has examined the Baroque concepts “form-light” and “form-color” that were already at the center of the debate at the time of Caravaggio, who used it as the most important element of his painting , a tool of evocation. The originality of Baroque light is its use to affirm the fullness of the shapes and volumes, but also to dramatize the painted subjects.

The analogy of the Baroque expedient of raking light that illuminates as “hidden light” (light source outside the visual field) has been thought, even for many works including Bernini sculptures, to be conceived to animate side surfaces, such as the room frescoed by Cortona, in which the painting at the center of the composition is both light and pictorial image, without the observer’s eye being disturbed by the contrast of tones. The light, an absolute protagonist in the bond between the illusory sign of Cortona and the lyric one of Bernini, comes from the six high windows of which four are corner ones; this affects diagonally the two great walls that become light conductors and — thanks to a clever play of indirect reflections — gives body and “its own light” to the Cortona fresco. The overall light project is structured in “effects” or “tricks,” such as the inside of a daytime scene: a pictorial beam of sunlight projects, with intensity and brilliance, a cross and its cuts on a wall surface. This does not preclude the complementary use of secondary lights coming from elsewhere. The examples can be classified roughly into two categories: natural effects and aesthetic effects. The realistic and esthetic effects can, in certain cases, combine, one bringing naturalism and the other the sublime. The result of this association is the poetics of light. Artificial lighting has been conceived, therefore, as a synthesis between Baroque realism and the poetics of “verosimile” (the “likely”), between aesthetic lighting effects generated by LED technology that enhances [the painting’s] own light, and natural effects where special projectors transpose a mystical and transcendental poetic though the use of light sources outside the field of view, from outside the eastern windows, and which brush diagonally against the walls metamorphosing into light conductors, in the constant game of outside-inside pressures.