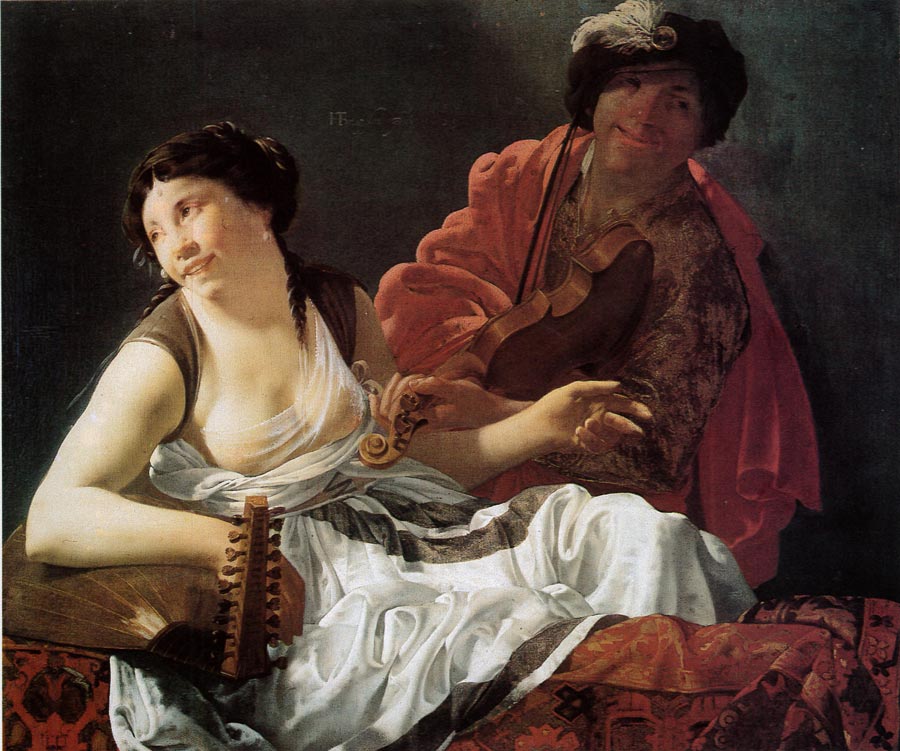 Ter Brugghen was one of the leading figures of the so-called Utrecht caravaggists, a group of Dutch painters strongly indebted with Caravaggio’s revolutionary artistic manner. He visited Italy several times, where during his stay in Naples and Rome he directly met with the naturalistic style of Caravaggio and his followers. Many of his works are devoted to musical themes, treated in a very realistic and  lively mood. The Duet of National Gallery of Rome, by chance discovered in 1928 by  German art historian Wolfgang Stechow, is a typical example of such genre painting, among the most noteworthy of Ter Brugghen’s works for its balance and fineness of execution, signed and dated 1629, the very year of his death.

As it is often the case with the paintings of Ter Brugghen and other Dutch caravaggists, the motif of the concert is laden with shimmering semantic nuances. The couple has not yet begun to play, the violinist seems to explicitly invite the girl to play with him with her instrument, a ten-course lute, commonly used in the first decades of 17th century, and both of them look outward, as if waiting encouragement by beholders. The transparent revealing cloth of the young woman and the perfect crossing of the arms and hands of the couple suggest that the painter is “playing” here on the erotic overtones of the image, so that the tuning-up of instruments and the musical harmony become a metaphor of the voluptas which enlivens the “earthly music”, according to a symbolism well rooted in Dutch culture, as proved, inter alia, by emblem and riddle books like the Enigmata sive Emblemata Amatoria (1624).