RMFC 12th edition : For the first time the ballet arrives at the Salone Pietro da Cortona

Silvia Azzoni and Oleksandr Ryabko, principal dancers of the Hamburg Ballet and winners of the Premio Roma 2014, will participate at the 12th season of the Rome Chamber Music Festival during  the June 7th and June 8th soirees.

With the music of Philip Glass and Arvo Path, their choreographies are original, expressly realized  for their performance during the Festival.

The choreographies have been curated by Yuka Oishi (See) and by the Brazilian choreographer Thiago Bordin (Sanzaru), who declared: “ I’ve been working for many years alongside my dearest colleagues from the Hamburg Ballet, Silvia and Sasha, and we have always wanted to create a pas de deux together. When they told me there was a project in Rome with the music of Philip Glass, I said yes immediately!”

The music will be played by Robert McDuffie and by Elizabeth Pridgen. 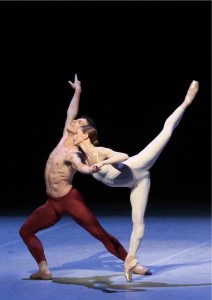