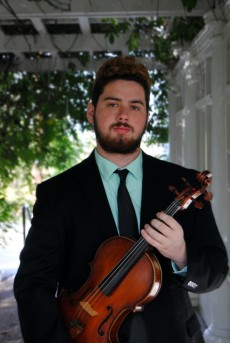 Alexander Locke, violist, studies with Rebecca Albers and Lawrence Dutton at the McDuffie Center.  Growing up in Columbus, Ohio he studied at the Chamber Music Connection and at the Cleveland Institute of Music.  He has participated in many master classes given by major string quartets – Emerson, Arianna, Jupiter, Ying, and Ehnes – and has given performances with many of these musicians.  He was awarded a bronze medal at the 2013 St. Paul String Quartet Competition. In addition to his studies on the viola, he teaches a beginning level theatre improvisation class during summers in Columbus Ohio.