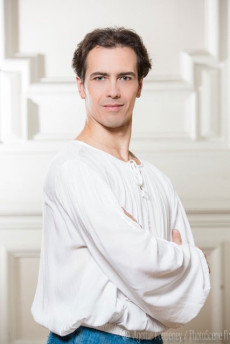 A principal dancer  with the Hamburg Ballet, Oleksandr Riabko was born in Kiev, Ukraine.  He trained at the Kiev Ballet School under Vladimir Densisenko.  After reaching the finals of the Prix de Lausanne, he continued his studies at the Hamburg Ballet School with Anatoli Nisnevich and Kevin Haigen. Mr. Riabko became a member of the Hamburg Ballet in 1996 and was promoted to soloist in 1999, and then to principal dancer in 2001. He has danced in works  by John Neumeier, Kevin Haigen, George Balanchine, Frederick Ashton, Jerome Robbins and John Cranko, and his repertoire includes  A Midsummer Night’s Dream, The Nutcracker, Swan Lake, Giselle, Sylvia, The Sleeping Beauty, Mercutio in Romeo and Juliet, Iago in Othello, La Bayadère, La Sylphide, Don Juan, Nijinsky in Nijinsky.  He has been a guest in the ballet companies of Dresden, Prague, Dusseldorf, Munich, many companies in Italy, in Australia, and performed in Galas in Japan, Taipei, Vienna, Monte Carlo, and London. Mr. Riabko performed Nijinsky as guest in John Neumeier’s Nijinsky with the national Ballet of Canada in Toronto. He is married to principal dancer Silvia Azzoni and they are parents of a daughter, Kira.