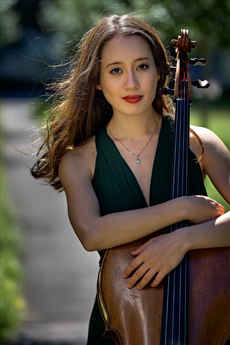 The third generation of cellists in her family, Annette Jakovcic enjoys a successful and diverse career as a soloist, chamber musician, and orchestral musician. As a soloist, she has been invited to perform recitals throughout the U.S., Europe, and Asia. The Chief Critic of the Boston Globe described her sound as a “transparent, heartbreakingly sincere emanation of the soul”.

Annette has performed in festivals such as Ravel and Casals festivals in France, Lavaux Classic, Niederlenzer Musiktage, and the Gstaad Menuhin Academy Festival in Switzerland, Festival Neo in Serbia, and the Yellow Barn and Bowdoin Festival in the U.S. Notable chamber music partners include Pavel Vernikov, Pierre Amoyal, Gérard Poulet, Ettore Causa, among others.
At 16 she began her University studies with Wendy Warner at the Columbus State University. She later continued her studies with Laurence Lesser at the New England Conservatory in Boston. She founded the Ivani Quartet which was mentored by Kim Kashkashian and members of the Cleveland and Juilliard Quartets. She received further guidance from cellists such as Philippe Muller, Gary Hoffman, Arto Noras, and Ivan Monighetti. Annette is pursuing her master’s studies in the class of
Clemens Hagen at the Universität Mozarteum in Salzburg.

In October 2021 she won the Mozarteum concerto competition and will perform the Beethoven Triple Concerto as a soloist at the Festspielhaus in Salzburg. She also won a prize in the Mainardi Competition. In 2022 Annette will perform a recital
under the prestigious Stiftung Mozarteum organisation. From the spring of 2022 she will continue her studies with Nicolas Altstaedt at the Hochschüle für Musik Hanns Eisler in Berlin. She plays on a 1742 Andrea Castagneri cello from Paris that had previously belonged to her grandfather.