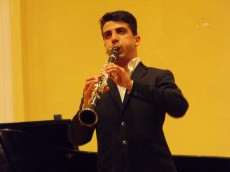 Antonio graduated from the Giuseppe Verdi conservatory in Turin and obtained his Master Degree at the Santa Cecilia Academy, studying with Alessandro Carbonare, among others. A winner of several national and international solo competitions , he has been as well chosen by many orchestras as principal clarinetist, the Tolone Orchestra in 2014, the Teatro Regio, Haydn ( Bozen) and Sanremo Symphony Orchesstra, among others. He won prestigious chamber music competitions in Italy and recently appeared as soloist in the Mozart Concerto in La maggiore K.622 and C.M. von Weber n.1 Concert in Fa minore ( please translate) for clarinet and orchestra.