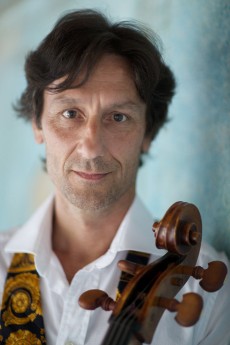 Antonio Lysy, an artist of international stature and dedicated pedagogue, has performed as soloist in major concert halls worldwide. He has collaborated with distinguished conductors including Yuri Temirkanov, Charles Dutoit, Sir Yehudi Menuhin, Sandor Vegh, and Kees Bakels. He continues to perform regularly both as a solo, and chamber music artist. Lysy has recorded extensively for CBC Radio, BBC Radio, Classic FM, and European radio networks. His love and commitment to chamber music is demonstrated by his musical directorship and founding in 1989 of the annual Incontri in Terra di Siena Chamber Music Festival in Tuscany, Italy. He enjoys exploring the versatility of the cello’s voice, from Baroque to electric, and is committed to projects which enrich his diverse interests in music. The currently touring show, “Te Amo, Argentina”, a personal journey through the heart and soul of Argentina’s fascinating culture, featuring solo cello and chamber works, dance, film, and spoken word, has met with widespread acclaim. In summer of 2003 Lysy accepted the position of Professor of Cello at University of California, Los Angeles. Prior to moving to the United States, he held a professorship at McGill University in Montréal. www.AntonioLysy.com.