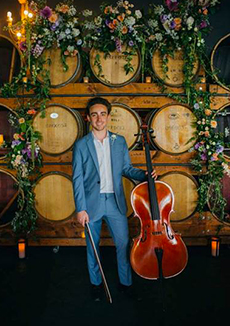 At twenty-one years old, cellist Atticus Mellor-Goldman has performed at concert venues around the world and has been featured on leading American radio shows From the Top on National Public Radio and Performance Today on American Public Media. In 2015 his string quartet from Los Angeles was awarded the gold medal of the Fischoff Chamber Music Competition’s junior division. The previous year he was selected as one of two musicians to act as a cultural ambassador for New York University Abu Dhabi.

Mr. Mellor-Goldman played for two seasons with the American Youth Symphony of Los Angeles, recognized as one of the world’s leading youth orchestras, and he has performed at such renowned venues as Royce Hall and Carnegie Hall. He has been privileged to performed alongside distinguished artists Osmo Vänskä, Erin Keefe, Ivano Zaneghi, Edgar Meyer, Robert McDuffie, and Amy Schwartz Moretti. He has also attended the prominent summer festivals of Kneisel Hall, Rome Chamber Music Festival, and the Moritzburg Festival Academy.