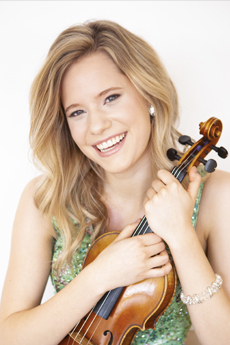 21-year-old violinist Aubree Oliverson is proving to be one of America’s most promising young artists.  She made her Utah Symphony debut at 11 and her Carnegie Hall Weill Hall recital debut at 12.  Featured several times on NPR’s From the Top, in 2016 she won the National Young Arts Foundation Award, the Dorothy Delay Fellowship at Aspen Music Festival and was named a U.S. Presidential Scholar in the Arts. Recent and upcoming engagements include touring Mexico with the Orchestra of the Americas, debuts with the San Diego and Pacific Symphonies, the National Symphony of Costa Rica, and performances at the Grand Teton Music and Innsbrook Festivals.  She studies with Robert Lipsett at Colburn Conservatory in Los Angeles and plays a 1742 Sanctus Seraphin violin on loan from Dr. James Stewart.