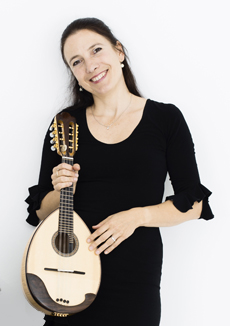 Caterina Lichtenberg, born and raised in Germany, is professor of classical mandolin/soprano lute at the Conservatory of Music in Cologne. For over twenty years she has been recording, teaching, and touring throughout Europe, Japan, Taiwan, South America, Canada, and the U.S. She has released ten CDs, five with guitarist/lutenist Mirko Schrader. As a specialist on early period instruments, she was invited to record on a 1775 mandolin from the Ferdinandeum museum in Innsbruck, Austria.

As featured soloist Caterina Lichtenberg has performed with numerous symphonies and chamber ensembles. Her collaboration with American mandolinist Mike Marshall brought together two of the greatest mandolinists in the world. Their first recording blurred the lines between their classical, jazz, bluegrass, and Brazilian musical backgrounds. Their second recording was of duets by J. S. Bach (two-part inventions, organ duets, and canons) on mandolin and mandocello and was released in 2015. Ms. Lichtenberg has also published her own instructional books and filmed two DVDs for the Homespun music education company. She currently lives part time in both Germany and California.