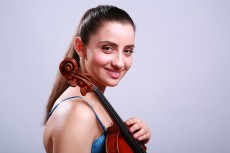 Born in Rome in 1999, Cecilia Merli began her violin studies at the age of 8 and graduated at the Santa Cecilia Conservatory in 2015. She performed as a soloist, in Italy as well as in Switzerland, Greece and the U.S.A., with different orchestras and recently had her debut with the Santa Cecilia Conservatory Orchestra; first violin of the Giovani Talenti Orchestra, she collaborated with many others youth orchestras.

A winner of many national and international awards, in 2014 she performed at the Carnegie Hall’ s Weill Recital Hall during the New York’s International Piano and String Competition.