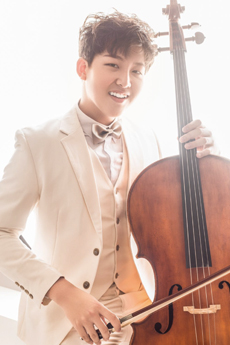 Born in Tianjin 2004, Hanxiang studied piano at 3, cello at 8, was admitted to Tianjin Conservatory of Music at 11 and the Conservatory High School at 12.  A winner of international competitions and holder of scholarships to work with major cellists, in 2017 he formed a piano trio, in 2018 joined the ZMZ Piano Trio, won  special Prize for Juniors Under 18 in the Fifth International Chamber Music Festival of Shanghai Conservatory of Music, joined a string quartet and won 2nd prize in the Hong Kong International String Open Competition.  In order to expand, he served as both cellist and pianist of the Zheng Orchestra.  In Poland was admitted to both the Poznan Paderewski Conservatory and the Katowice Szymanowski Conservatory, won the J. Zarebski International Music Competition First Prize in December 2019 and performed at the Royal Palace in Warsaw.