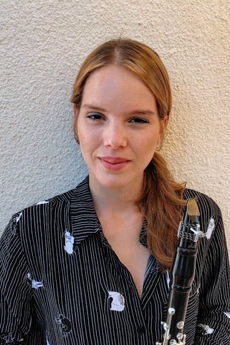 Clara Riccucci begins to study clarinet at the age of 10 at the Scuola di Musica di Fiesole where she graduated with honors in 2017 under the guidance of the father, Giovanni Riccucci.
As a soloist, she has worked with many orchestras and ensembles over the years: Orchestra Giovanile Italiana, Orchestra Toscana Classica, Orchestra Città di Grosseto, among others and directed by D. Gatti, G. Pretto, Ph. Auguin, N. Paszkowski, D. Giorgi.
In June 2018 she was soloist with the Orchestra Galilei in the Mozart clarinet concerto kv622, under the direction of E. Rosadini.
Winner of the first prize in the Riviera Etrusca competition in 2013 and 2015, she won the Premio Crescendo in 2017. For several years she was granted a scholarship by the Scuola di Musica di Fiesole. She currently studies at the Hochscule fur Musik-Luzern, with P. Beltramini and attends the postgraduate course at the Scatola Sonora Academy in Rome with C.Palermo. She is also a student of bass clarinet with D.Goracci (National Academy of Santa Cecilia) and of the Es-clarinet with H. Matzener (Opernhaus Zurich).
In Fiesole she developed her passion for chamber music repertoire and achieved courses in Jazz and contemporary music. In 2017-2018 she took masterclassess and attended courses with A. Carbonare in Rome and at the Lübeck Musikhochschule in the class of Reiner Wehle and meetings with Sabine Meyer. Throughout the years she has been invited to various festivals (Accademia Chigiana, Livorno Music Festival, Alpen Klassik etc.) performing with G. Riccucci, S. Meyer, R. Wehle, A. Carbonare, P. Beltramini, EM Baroni, D. Krakouer (klezmer).