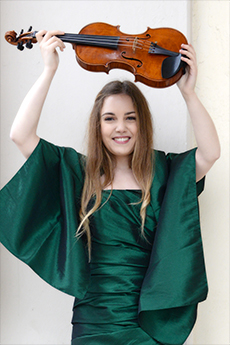 Claudia Irene Tessaro began studying violin at age five. She graduated with merit from the Conservatory A. Steffani at age seventeen. Ms. Tessaro attended many master classes with internationally renowned artists such as Ilya Grubert, Pavel Vernikov, Robert McDuffie, and Salvatore Accardo. She obtained her master’s degree in music performance from the Conservatorio della Svizzera Italiana, where she is currently pursuing her Master of Arts in Specialized Performance degree under the guidance of Pavel Berman.

Since 2006 Ms. Tessaro has participated in many national and international competitions as a soloist and won First Prize and Special Mention of the Jury unanimously at the II Competition F. Pavia in 2011. She also won First Absolute Prize of the ‘900, and National Schools Award at the 2012 International Competition A. Salieri in Legnago; First Absolute Prize and finalist for the Crescendo Award at the 2013 Crescendo Competition in Florence; and the prestigious Arts Award of the Ministry for Instruction, University, and Research (MIUR) for the string instrument division at the Nicola Sala Conservatory of Benevento in 2013.

Ms. Tessaro is a member of the Orchestra del Teatro Olimpico, Vicenza, and the Orchestra Giovanile L. Cherubini. She participated in the 2013 and 2016 Rome Chamber Music Festival and is pleased to return for a third time.