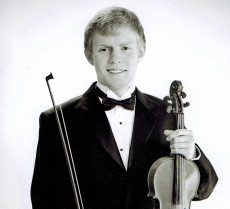 Collin Turner, now 20 years old, from San Antonio, Texas began violin study at age 5.  At age 9 he made a 2 week tour of China with Long Zhou and the ensemble Strings in Motion. Once in high school he won the San Antonio Young Artists Competition and soloed with both the Austin Civic and San Antonio Symphonies. He has soloed with several other Texas orchestras. Currently a sophomore at the Robert McDuffie Center for Strings, he studies with David Halen, Amy Schwartz Moretti, and Robert McDuffie.  He plans to earn his Master of Music in Violin Performance.