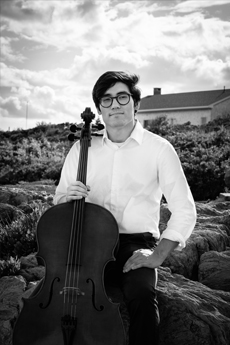 Constantine is currently pursuing a Bachelor of Music in Cello Performance at the Robert McDuffie Center for Strings of Mercer University. The recipient of a full-tuition Presidential Scholarship as well as the prestigious Robert McDuffie Scholarship award, Constantine studies with distinguished artists Julie Albers, Richard Aaron, and Leo Singer.

Constantine was awarded a scholarship and invitation to participate in the 2021 Bowdoin International Music Festival and the 2019 Center Stage Strings Music Festival. He regularly performs in the Fabian Chamber Concert Series of Mercer University, where he has played alongside distinguished artists Amy Schwartz Moretti of the Ehnes Quartet, Lawrence Dutton of the Emerson Quartet, and Andrew Brady and Elizabeth Tiscione of the Atlanta Symphony Orchestra. As an orchestral performer, Constantine acted as principal cellist for the Macon Mercer Symphony, a collaboration between Atlanta Symphony principal winds, brass and percussion and the Robert McDuffie Center for Strings.

Constantine is from Chicago and the son of two orchestral conductors. Constantly surrounded by music, he began cello study at the age of 6. He credits his parents with exposing him to the immense amount of dedication needed to become a professional musician and with inspiring him to create his own voice through the cello. His past teachers include Anthony Arnone and Moises Molina.