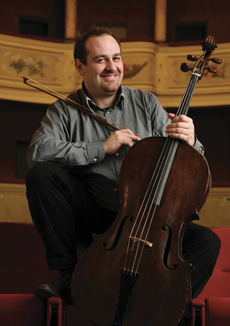 Daniele Bovo began his widespread career by taking his degree in modern cello at the Turin Conservatory Giuseppe Verdi and then specializing in Baroque cello at the Hochschule of Lipsia. His vast performance experience has included celebrating the 10th anniversary of the fall of the Berlin Wall at the Brandenburg Gate with Mstislav Rostroprovich and the rock band the Scorpions—he was the only Italian among the 160 cellists! His performances and collaborations with other artists cover a wide range of music and styles, ranging from Lionel Richie and Sting to Luciano Pavarotti and José Carreras.

Mr. Bovo’s performances in early music have taken him to major concert halls throughout the world. He performs with many major early music orchestras and he has toured in Europe, Japan, South Korea, and the United States with the Venice Baroque Orchestra. As a classical musician he has recorded for Naxos, Divox, and Tactus, and also for Deutsche Grammophon as part of the Venice Baroque Orchestra. He plays a Paolo Castello cello from c. 1780, an anonymous cello dated c.1720, and an anonymous five-string piccolo cello from the early nineteenth century.