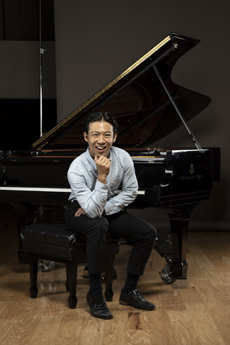 As recipient of a Kovner Fellowship, Derek has completed undergraduate study with Veda Kaplinsky at Juilliard, and also studied fortepiano and harpsichord.  In 2019 he began fellowship position as pianist of the Aspen Contemporary Ensemble at Aspen Music Festival and represented the U.S. at the Kyoto International Music Students Festival in Japan.   In a multimedia collaboration between animation and music, Derek performed the Chopin études live as a synchronized soundtrack to the short film collection Magic Piano and The Chopin Shorts, produced by Academy Award winner Hugh Welchman in concerts at the Film Society of Lincoln Center, the Dallas Opera House, the E-G conference in California, the La Ciudad de Las Ideas conference in Mexico, and on two tours of China that spanned nine cities.