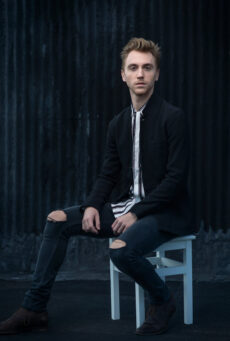 Lauded for his “haunting intensity” (Wall Street Journal) and “delicate yearning” (Opera News), baritone Dominik Belavy has established himself as “one to watch with his smooth cultivated singing,” (Opera News). Dominik’s recent operatic highlights have included appearances at Santa Fe Opera, Opera Theatre of St. Louis, Michigan Opera Theatre, London’s Holland Park and L’Opéra Royal de Versailles. He has spent numerous summers as a fellow at the Tanglewood Music Center where he cultivated a love for art song, chamber music and contemporary works—he was recently invited back as a guest to sing Junior in Bernstein’s A Quiet Place. He has sung in world premieres of works by Augusta Read Thomas and Nathan Davis and has worked closely with John Adams and Virko Baley on performances of their works. Numerous appearances at Alice Tully Hall include an all-Schubert program following his win of Juilliard’s Honors Recital and Lieder lines fahrenden Gesellen with Juilliard Lab Orchestra. He has been featured in live broadcast on BBC 3’s In Tune series as well as WQXR’s Midday Masterpieces and in a documentary special on Holland’s TV-NPO Cultura. Belavy’s love of sacred music has culminated in numerous performances with John Harbison and a tour of Bach’s B Minor Mass with Ton Koopman. Mr. Belavy received his Master of Music degree at The Juilliard School as a Toulmin Scholar where he also received his Bachelor of Music degree. Dominik studied with Sanford Sylvan.