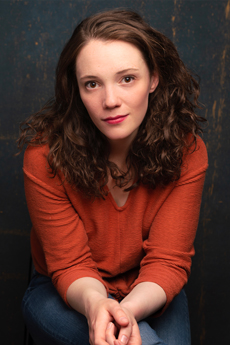 Boston-based soprano, Elaine Daiber, has been heralded for her “spectacular vocalism”, which has garnered much acclaim on the operatic, concert, and recital stages. Elaine looks forward to engagements with Cambridge’s Coro-Dante as the soprano soloist in Vivaldi’s Gloria, as the soprano soloist with The New England Symphony in a concert of works by J.S. Bach, and in recital with JJ Penna in a performance of Messiaen’s rarely heard Harawi. Most recently, Elaine was at The Yellow Barn Chamber Music Festival where she appeared in recital with famed pianist Gil Kalish, and also performed works by György Ligeti, Earl Kim, Claude Vivier, and György Kurtág. Last season, Elaine participated in a concert of Bach arias and duets with Emmanuel Music, a production of Poulenc’s La voix humaine in Boston’s Jordan Hall and in a concert of new works by women composers with NYFOS Next. Previous seasons have included a role debut as Ilia in Mozart’s Idomeneo in Boston’s Jordan Hall, and recital appearances as a Schwab Vocal Rising Star with the New York Festival of Song, as the soprano soloist in Bach’s Magnificat with Counterpoint Concerts, in the US premiere of Helen Grime’s Bright Travellers. Other engagements have seen the versatile soprano in a variety of performances with The Tanglewood Music Center, The Bard Music Festival, The New York Festival of Song, The Orchestra Now and the Albany Symphony, among others. Elaine holds degrees from Oberlin Conservatory, Bard College, and New England Conservatory.