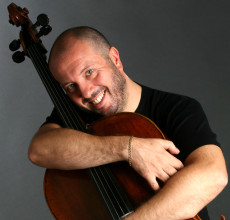 Born into a family of musicians, Enrico Dindo was principal cellist of the Teatro alla Scala Orchestra from 1987 to 1998. He won First Prize at the “Rostropovich” Competition in Paris in 1997. The great Russian Maestro wrote about him: “he is a cellist of exceptional qualities, a complete artist and a formed musician, with an extraordinary sound which flows as a splendid Italian voice”.

His international activity as a soloist includes performances with prestigious orchestras such as the BBC and the Rotterdam Philarmonic Orchestras, the Orchestre Nationale de France, Filarmonica della Scala, the St. Petersburg Philharmonic Orchestra, the State Orchestra of São Paulo, the Tokyo, Toronto and Chicago Symphony Orchestras, the Gewandhausorchester. In 2010 he recorded the Shostakovich cello concertos numbers 1 and 2 and the Bach cello suites.

Director and founder of “I Solisti di Pavia” chamber orchestra, Dindo holds the cello chair of the Conservatorio della Svizzera Italiana in Lugano and teaches at the Pavia Cello Academy and at the Tibor Varga Academy Summer Courses in Sion, Switzerland.

Enrico Dindo records for Decca and Chandos and plays a 1717 Pietro Giacomo Rogeri cello (ex Piatti), given to him by the Pro Canale Foundation.