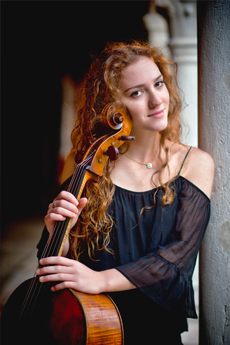 Born in Rome in 1999. Nominated “Young Artist of The Year” by the jury of the International Classical Music Award 2020, she already has her diploma in cello at the age of 14, recording debut for Warner Classics,  live on Rai from Montecitorio for the National Academy of Santa Cecilia and the conferral of the title of Standard Bearer of the Republic. Pupil of Antonio Meneses since 2015 at the Chigiana Academy of Siena, she received the Monte dei Paschi Award reserved for young talents from the Academy and the Diploma of Honor in the last year of attendance (2019). Established in numerous national and international competitions, she carries out an intense concert activity both as a soloist and in chamber ensembles that has brought her to prestigious halls: Konzerthaus in Berlin and the Wigmore Hall in London and in renowned festivals, “Verbier Festival Academy “(CH),” Chamber Music Connects the World “of Kronberg (DE),” Al Bustan Festival “in Beirut (LB),” La Musica Festival ”  Sarasota (USA),” Chigiana International Festival ” Siena, and Spoleto’s “Festival dei Due Mondi”. She has performed with artists such as S. Accardo, A. Dumay, G. Kremer, B. Giuranna, I. Golan, L. Lortie, A. Meneses, M. Quarta, Sir A. Schiff and C. Tetzlaff. Thanks to the “Young Italian Musical Talents in the World”  promoted by the Ministry of Foreign Affairs and International Cooperation in collaboration with the Chigiana Academy, she performed in Beijing and New York.  He plays a P.G. Rogeri, Brescia, 1751 generously granted by Tarisio Trust.