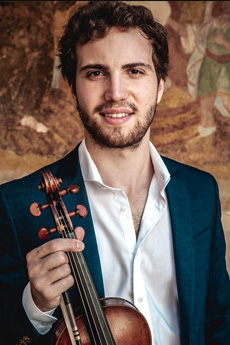 Born in Rome, he graduated from the Conservatory of Santa Cecilia and subsequently specialised at the National Academy of Santa Cecilia. He continued his studies at the Guildhall School of Music in London with David Takeno and later at the Conservatorio della Svizzera Italiana with Pavel Berman, winning the prestigious ESKAS scholarship. He performed in prestigious venues including the Wigmore hall in London, the Palau de la Música in Barcelona, the LAC Lugano Arte e Cultura and was the winner of numerous national and international competitions.

As a soloist he performed with the YMSO in London, the E&Y Talent Orchestra and the Orchestra Senza Spine in Bologna. During his career he was influenced by great musicians including Zakhar Bron, Roberto González-Mojas and Pavel Vernikov.

Since 2022 he has been part of the Orchestra of the Accademia Nazionale di Santa Cecilia in Rome.

He plays a Annibale Fagnola violin (1928)