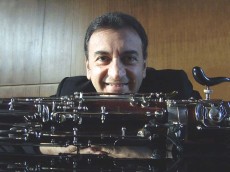 Francesco Bossone began music study with his father as a young boy. He then con-tinued at the Conservatory of San¬ta Cecilia under the guidance of Marco Cos¬tantini and graduated in 1980. Following his debut as First Bassoon in the Sanremo Sym-phony Orchestra in 1981, he took first prizes in the Milan Musical Afternoons Orchestra competition (1983) and the Tuscan Regional competition (1984). Since 1985, he has been First Bassoon soloist with the Orchestra of the Academy of Santa Cecilia. Mr. Bossone maintains a busy concert career in Italy and abroad, both as soloist and with chamber groups. He collaborates with Claudio Abbado, Antonio Pappa¬no, Myung-Whun Chung, Michele Campanel¬la, Uto Ughi, Giuliano Carmignola, Massimo Quarta, Antony Pay, Franco Petracchi, Ennio Morricone, Alexander Lonquich, Heinz Hollig¬er and other artists. Representing the Orches¬tra of the Academy of Santa Cecilia, he took part in the 1990 Carnegie Hall memorial con-cert for Leonard Bernstein given by the New York Philharmonic.
He was invited to perform as First Bassoon with the London Royal Phil¬harmonic Orchestra by Daniele Gatti, with the Syphonica d’Italia by Lorin Maazel, and with the Mahler Chamber Orchestra by Claudio Abbado. He teaches numerous courses and master classes.