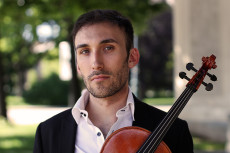 In 2008 Francesco Tosco graduated in violin at the “G. Verdi” Conservatory of Turin, and in viola at the Bologna “G. B. Martini” Conservatory with full marks and honors under the guidance of Antonello Farulli. He is currently attending the Master of Arts in Music Performance at the Italian Switzerland Conservatory in Yuval Gotlibovich’s class.

Guest of the Rome Chamber Music Festival for the second time, he played in many festivals like the Leipyig Bachfest, the Serate Musicali of Milan, MiTo Settembre Musica, Festival Beethoven.

Since 2013 he is a member of the Imola Chamber Orchestra, conducted by Vladimir Ashkenazy, and since 2011 he plays permanently in the Turin Philharmonic Orchestra, giving the world premiere of the Concerto for two violas, strings and basso continuo by F. M. Sardelli. Since 2014 he works in the Rai National Symphony Orchestra.