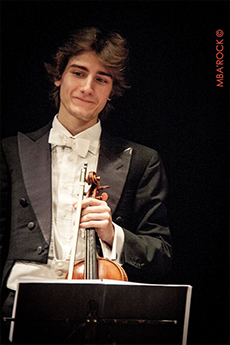 Francesco Zanchetta, born in 1996, graduated in violin from the Benedetto Marcello Conservatory in Venice obtaining top marks with honors. Through a scholarship offered by the Italian embassy in Moscow, Mr. Zanchetta was able to study at the Tchaikovsky Conservatory of Moscow in the class of Vladimir Ivanov. He has participated in the Uto Ughi’s renowned master classes. From 2014 to 2017 Mr. Zanchetta performed as a soloist with the La Fenice Theater Orchestra. He was awarded by Claudio Scimone as best student of the Academy of I Solisti Veneti and became a member of the ensemble, with which he participated on several international tours. Mr. Zanchetta plays on a Tyrolean-school violin from the end of the eighteenth century, owned by Edmondo Malanotte, founder member of the historical ensemble I Virtuosi di Roma.