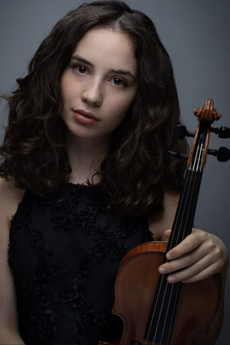 Born Assisi 2000, early music both piano and violin, in 2010 she was given a scholarship to Scuola di Musica di Fiesole; In 2015 another scholarship allows her to continue her studies at the Dora Schwarzberg Academy Vienna and with Silvia Marcovici at University of Music Graz. As soloist and chamber musician has won national and international competitions. Since 2015 has performed in major cities in Italy, Austria, the Netherlands, and U.S. In 2017 as member of the LGT Young Solists chamber orchestra she recorded for RCA Sony Productions and Bayerischer Rundfunk. As soloist has performed with the Solisti Aquilani chamber orchestra and the Lithuanian chamber orchestra. Currently is part of the Italian agency Musica con le Ali. In 2019 was awarded the Intnational Prize Excellentissimus from Cattedrali Letterarie Europee.