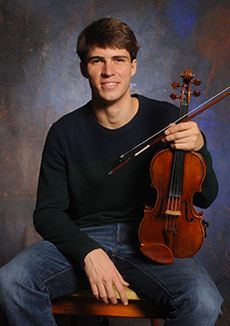 Violinist and composer George Meyer has performed his own compositions at Chamber Music Northwest (Portland, Oregon), the Telluride and RockyGrass Bluegrass Festivals, and the Savannah Music Festival. in 2016 Ensemble Quodlibet premiered his Concerto Grosso for string quartet and orchestra in New york City. His other performances include those at the Rome Chamber and Aspen Music Festivals. He has appeared with his father Edgar Meyer and with Sam Bush, Jerry Douglas, and Mike Marshall. After graduating from Harvard in 2015 with an English degree, he began a master’s degree in violin at Juilliard in 2016.