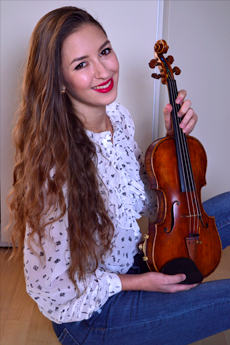 Born in 1998 in Castelfranco Veneto (Northern Italy), she started playing violin at 5 years old.In 2019 she obtained her Master degree with praise and mention with Massimo Belli at the “Giuseppe Tartini” Conservatory of Trieste. Since 2018 she studies with Salvatore Accardo at the Stauffer Center for Strings in Cremona and the Accademia Chigiana in Siena and from 2019 she is a student of the National Academy of Santa Cecilia in Rome under the guidance of Sonig Tchakerian. She studied also with Renato Zanettovich, Zakhar Bron and Shlomo Mintz. She has won numerous national and international competitions and played as soloist in prestigious halls such as Teatro Ponchielli di Cremona, Teatro Politeama Rossetti, Sala Verdi of the Milan Conservatory for the “Serate Musicali” music festival and the Apollinee Halls of Teatro La Fenice in Venice. She currently plays in several concerts as soloist and concertmaster for prestigious musical institutions in Italy and abroad such as “I Solisti Veneti”, the New Chamber Orchestra “Ferruccio Busoni” and the “Orchestra da Camera Italiana” conducted by Salvatore Accardo.In 2020 she has recorded Mozart Violin Concerto in D major KV211 for Movimento Classical recording company. She plays on a violin made by Marino Capicchioni (1947).