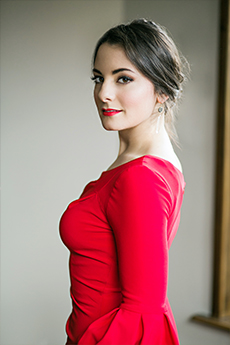 Praised by Opera News and ArtsATL as a “standout”, young American mezzo Gina Perregrino is already garnering attention on stages around the country.

Gina has been heard at Minnesota Opera, Opera Philadelphia, The Dallas Opera, Opera Theatre of Saint Louis, Ópera de Guatemala, The Atlanta Opera, Central City Opera, and OperaDelaware. Gina made her company debut with the Santa Fe Opera as Paquette in a new production of Candide by Laurent Pelly, and she returned in 2019 to sing the role of Pastuchyňa in Janáček’s Jenůfa.

Also an interpreter of art song, she was a featured recitalist twice with the New York Festival of Song and the Caramoor Center for Music and Arts under the direction of Steven Blier and Michael Barrett.

Gina is no stranger to major recording projects. Under the overseeing of Salman Rushdie, Gina performed and recorded the role of the Blindwoman in the world premiere of Shalimar the Clown with Opera Theatre of Saint Louis and the St. Louis Symphony Orchestra, where the recording was distributed on iTunes, Spotify, and all major outlets. Her performance as Maddalena in Rigoletto with the Ópera de Guatemala was recorded and broadcast on Univisión TeleOnce throughout parts of Mexico and Central America.

Before the surge of COVID-19, Gina was contracted with Boston Lyric Opera for their 2020 production of Giulio Cesare in Egitto that has since been cancelled with hopes of rescheduling at a later date.

In the 2021-22 season, Gina returns to the The Atlanta Opera as Jenny in Threepenny Opera, makes her debut with the Rome Chamber Music Festival and joins Teatro Regio di Torino in Turin, Italy as an ensemble member.

She is a graduate of Manhattan School of Music in New York City.