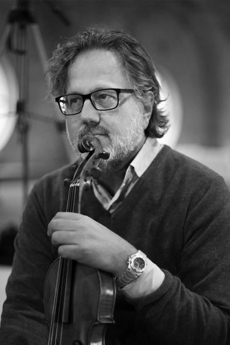 Giorgio Fava, musically forged in his native city of Treviso under the guidance of Antonio Giuliano Carmignola, went on to perfect his studies with Maestro Corrado Romano in Geneva. In the Swiss city he also proceeded to graduate in Baroque Violin with honors from the Centre de Musique Ançienne in the class of Chiara Banchini.
Since 1983 he has been dedicated to his role as first violin in the “Sonatori de la Gioiosa Marca”, an ensemble of international renown and that has become a touchstone for interpretation of Venitian music of the XVII and XVIII centuries.  With this formation he has performed in all the most important international festivals.
Fava has taken part in numerous recordings or the most important record companies and European radio stations. In 2001, during the  Premio Internazionale del Disco Antonio Vivaldi held in Venice by the Giorgio Cini Foundation, he received the special prize of the jury. As First and Solo Violin he has played under the direction of  Gustav Leonhardt, Ton Koopman, Alan Curtis, Andrew Parrot, Michael Radulescu, Diego Fasolis, Renè Jacobs, Christopher Hogwood and Roy Goodman. As well as his concert and research career, Fava has also always time to teaching. Professor first at the Venice Conservatorium, then at that of Castelfranco Veneto, he has also been Professor of Violin at the Hochschule für Musik of Trossingen in Germany. At the moment he is the holder of the course for the upper two years of Baroque/Classical violin at the A. Steffani Conservatorium of Castelfranco and of the advanced courses at the Accademia Vivaldi of the Vivaldi Institute of Venice on the San Giorgio Island.