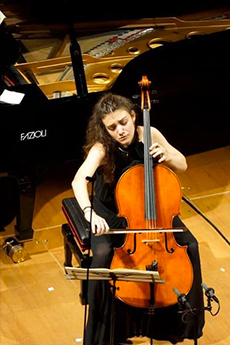 Giulia Attili was born in December 2000. She began studying cello at the age seven with Giorgio Schultis.  She has studied under the guidance of Antonio Meneses in Siena at the Accademia Chigiana and in Cremona at the Accademia Walter Stauffer. When Ms. Attiliwas eleven years old, she won the TIM in Paris and took the David Popper International Cello Competition in Hungary at the age of fourteen. She has performed in prestigious music venues including the Chigiana international Music Festival, the Accademia Chigianain Bruxelles, the Auditorium Arvedi and Teatro Ponchielli in Cremona, the Palazzo Pitti in Florence, the Teatro La Fenice in Venice, and the Boubo-Music Foundation in Switzerland. Ms. Attili has performed with artists such as S. Accardo, M. Campanella, B. Giuranna, A. Meneses, and G. Wyss. Since 2016, she has participated in masterclasses with Thomas Demenga at the De Sono Association in Turin. Ms. Attili collaborates with the Swiss Foundation Boubo-Music, the Italian Association De Sono, and the Italian Association Musica con le Ali.