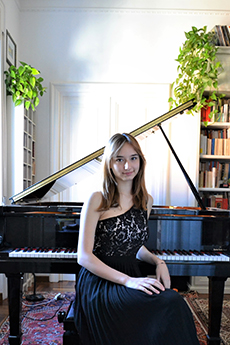 Giulia Loperfido was born in Rome. She began studying the piano at the age of seven and two years later was admitted to the Santa Cecilia Conservatory of Rome, graduating with honors in February 2017 at the age of sixteen.

As a soloist, Ms. Loperfido has won many Italian and international competitions since the beginning of her career.  Since 2013 she has focused on chamber music and working ensemble with violin. Ms. Loperfido has performed in concert as a soloist and in chamber groups at many festivals in Italy and abroad, among which are Les Sommets du Classique au Jazz in Crans-Montana (Switzerland), the Fortissimissimo Firenze Festival in Florence, the Prestissimo Festival in Rome, 6 per l’Arte at the Basilica di Sant’Antonio in Padova, and the autumn concert season at Giardini La Mortella in Ischia. She has also worked in collaboration with the Amici dell’Opera di Pistoia Association and the Accademia Filarmonica Romana, Hungary’s Academy in Rome.