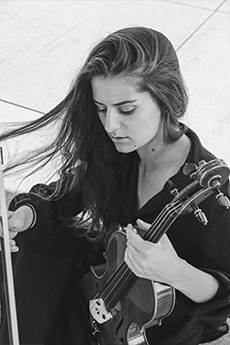 Born in 1995 in Zurich and raised in Lugano, Switzerland, Giulia Wechsler startedher musical education at the Conservatorio della Svizzera Italiana, later moved on to Ivan Vuckevic’s viola class in Menhuin Academy in Coppet . She has recentlyfinished her Bachelor studies at the Hochschule für Musik Hanns Eisler in Berlin. In 2014 She has won first prize of the “Antonio Salieri” Competition, and also at the Swiss National Competition for Young Musicians. She has been playing with different chamber groups, gathered experience playing in various concert halls acrossthe globe ( Tokyo Opera City, Tohnalle Zürich, The House of Music in Quito South America, Berliner Philarmonie, Musikverein in Wien etc.) . She was invited to take part in many chamber music festivals and shared the stage with prestigious artists. Since 2016 she has been playing with the Russisch-Deutsche MusikAkademie led by maestro Valery Gergiev. Was an Academist of Rundfunk Sinfonieorchester Berlinbetween 2017 and 2019 and also played with the Berliner Philarmoniker led by Simon Rattle and Orchestra dell’Accademia Gustav Mahler. From October 2020 shewill be studying in the class of Nobuko Imai in Amsterdam. Giulia is currentlyplaying a viola by Stefan- Peter Greiner (2014)