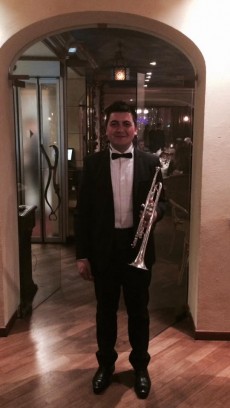 Giuseppe Iacobucci graduated in trumpet from the A. Casella Conservatory of L’Aquila and obtained his master’s degree from the Santa Cecilia Academy. He was part of the Santa Cecilia JuniOrchestra for three years and also has played with the Orchestra Sinfonic Abruzzese, Orchestra del Teatro Marrucino, and Orchestra Sinfonica of Rome. Since 2013 he has been first trumpet of the Orchestra Givanile Italiana and taken part in several international festivals. A member of the Marsican Brass Quintet since 2007, he has performed in several chamber-music concerts in central Italy. He is also a member of the Italian Brass Band.