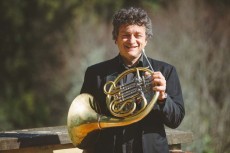 Guido Corti is considered one of the finest horn players in Europe. Having completed his studies in Italy, he went to the United States to perfect his technique, studying in Chicago under Clevenger and Jacobs. In 1976 Mr. Corti won the first prize at the International Chamber Music Competition in Colmar (France). This marked the beginning of a career as a soloist which has seen him perform not only for all the major Italian concert societies but also in the most important concert halls on the international scene – Carnegie Hall in New York, the Musikverein in Vienna and Herkules Saal in Munich.
Mr. Corti is a very active member of European chamber groups – the Mullova Ensemble, Katia and Marielle Ensemble, European Community Chamber Orchestra and Mirò Quintet. He has already recorded much of the horn repertoire and is at present professor at the Luigi Cherubini Conservatory in Florence and at the Fiesole School of Music. Mr. Corti holds seminary and master classes for the most prestigious institutions and is regularly invited to sit on the jury of international music competitions.