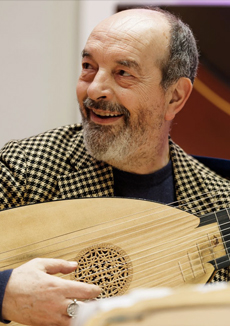 Ivano Zanenghi was born in Venice and studied music there from early youth, honing his art of performance with Hopkinson Smith. He has performed in major concert halls in major cities throughout the world—in London, New York, Los Angeles, Tokyo, Zurich, Berlin, Amsterdam, Vienna, Paris, and Milan, and has collaborated with many of the world’s great musicians and conductors. Mr. Zanenghi founded Opera Stravagante, an ensemble that made its debut during the celebration of the Monteverdi Choir’s 40th anniversary, performing Vespro della Beata Vergine by Claudio Monteverdi in the famous Basilica di San Marco in Venice under the direction of John Eliot Gardiner. He has recorded many works for Archiv (Deutsche Grammophon), Arts, ORF, and Sony Classical. Mr. Zanenghi is professor of Baroque lute and basso continuo at Venice’s Scuola di Musica Antica, and is a founding member of the Venice Baroque Orchestra. Since 2005 he has collaborated with the European youth project Junges Musikpodium Dresden-Venice.