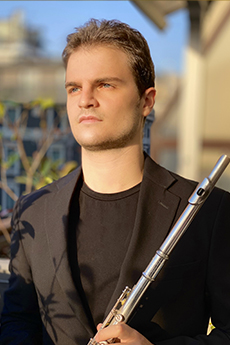 Having begun flute at age ten, Jacopo graduated with full honors in Terni and from the Accademia di Santa Cecilia, Rome. He has studied with many great Italian flute maestros, such as Mazzanti, Oliva, Evangelisti, and Marta Rossi, as well as voice with Elizabeth Norberg-Schulz.
An avid chamber musician, Jacopo has often performed duos with harpist Giulia Bigioni. He played principal flute for the Youth Orchestra of the Opera di Roma and for Il giudizio di Paride conducted by the composer, Marcello Panni, at the Teatro Palladium. Jacopo is studying for his second level master’s degree in piccolo at the G. Verdi Conservatory of Milan as well as studying at the Accademia Italiana del Flauto.