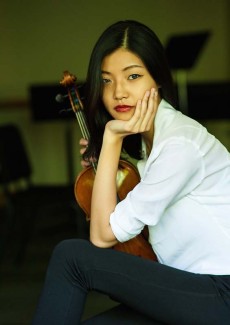 Jecoliah Wang started playing violin at age of six. At fourteen she performed as concertmaster of the St. Louis Symphony’s Youth Orchestra for two seasons, won the Youth Orchestra’s Concerto Competition in 2010 and made her St. Louis Symphony debut in 2011 at age sixteen. She has attended the Innsbrook Institute, the New York String Orchestra Seminar, and since 2011, the Aspen Music Festival, having won two fellowships. Since 2014 she has been a fellowship resident artist at the Amelia Island Chamber Music Festival. She recently received her Bachelors of Music degree from the Robert McDuffie Center for Strings. This is her third time at the RCMF.