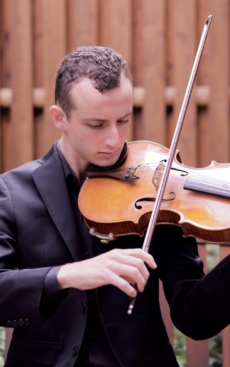 Jeremy Klein recently completed his undergraduate degree at Juilliard, where he will be returning in the fall as a candidate for the Master of Music degree as a student of Misha Amory and Heidi Castleman. He previously studied with Mark Lakirovich at the New England Conservatory Preparatory School. Jeremy has attended music festivals including Aspen, Bowdoin, and Vivace, and has received important coaching and mentoring from Victoria Chiang, James Dunham, Hsin-Yun Huang, Steven Tenenbom, and Phillip Ying, among others. He has performed concertos by Bartók and Telemann with orchestras in Italy and Ukraine, and has performed as an orchestral musician with ensembles including the Apex Ensemble and Florida Orchestra. He also takes a strong interest in Jewish music, and has played at several synagogues in the New York area. In his free time, Jeremy enjoys cooking, running, and spending time with his family, friends, and larger-than-appropriate dog.