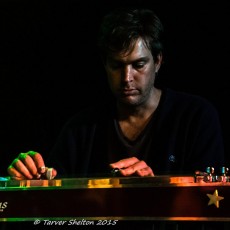 John Neff is an american instrumentalist, specializing in pedal steel and guitar. He began playing guitar in Savannah, Georgia when he was twelve and learned pedal steel in his early twenties. As he developed his non-traditional style, demand for his approach to pedal steel kept him busy performing with bands such as The Allman Brothers Band, Phosphorescent, Superchunk, Widespread Panic and Bloodkin. He has recorded and toured with Booker T. Jones for the Grammy-winning Instrumental Album of the Year, Potato Hole. John’s early projects included the Star Room Boys, Barbra Cue, Japancakes, and the Drive-By Truckers, of which he was a founding member.

John’s influences range from Buddy Emmons and Lloyd Green to BJ Cole and David Lindley. John is currently based in Athens, Georgia, where he has lived for twenty years, and stays busy with playing pedal steel, guitar, lap steel and dobro with various live and recording projects.