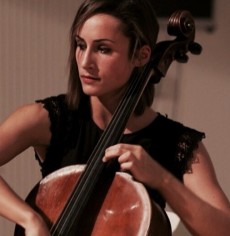 Born in France, in 2013 Julie was laureate of the Fondation Natexis Banque Populaire, performing Tchaikovsky’s Rococo Variations at the Festival des Rencontres de Violoncelle de Bélaye broadcast on France Musique.  She was part of the Werther Trio which won the Prix de la Presse at the International Chamber Music Competition of Lyon in 2011. Julie has just recorded her first album on the theme of Central Europe on the Klarthe label. It includes Zoltan Kodaly’s Cello Sonata. She is currently in residence at the Queen Elisabeth Music Chapel in the class of Gary Hoffman and has a scholarship from Prince and Princess de Chimay.