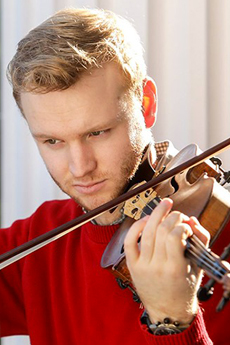 Described as “mesmerizing with impeccable intonation” by the Burlington Hawkeye Times, twenty-one-year-old American violist Keoni Bolding has already established a career across the United States and Europe. Recently named artist-in-residence of the Southeast Iowa Symphony, Mr. Bolding has soloed at major American venues including Carnegie Hall, the Kennedy Center, and the U.S. Capitol. As a fellowship participant at the Aspen Music Festival he shared the stage with Renée Fleming and Robert Spano among others. Aside from classical music, Mr. Bolding has been featured on the Emmy-nominated show SongCraft Presents. He resides in the suburbs of Philadelphia where he helps his family take care of their small dairy farm.