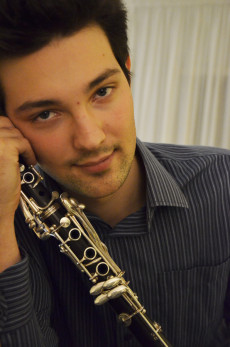 Lorenzo Zanisi started learning music when he was just 4 years old.  At 9 he was selected to join the prestigious “Coro di voci bianche di Santa Cecilia”.  As a member of the choir, he took part in several concerts at the Auditorium Parco della Musica in Roma and at the Teatro dell’Opera di Roma, with conductors such as Prệtre, Conlon and others. In 2006, he joined the Accademia di Santa Cecilia’s youth orchestra, “Juniorchestra!”, performing as the Princpal Clarinet in both this orchestra and Orchestra Internazionale di Roma (OIR).  In these orchestras he has performed in more than 70 concerts: twice at the Ravello Festival; at the Due Mondi Festival in Spoleto; at the Campidoglio in Rome; at Nervi Hall in Vatican City; at Giardini La Mortella in the prestigious festival organized by W. Walton’s foundation; in the Festival Federico Cesi and in many other places around Italy.  Lorenzo Zanisi joined the Rome Chamber Music Festival in June 2013.  He graduated from L’Aquila Conservatory with the highest marks and is now continuing his studies under the guidance of M° Calogero Palermo.