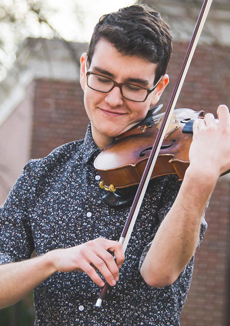 Lukas began his studies on viola at the age of nine. He attended the CW Post summer chambermusic festival when he was twelve and discovered his passion for playing chamber music. He began taking lessons with Matthew Pierce at age thirteen. He also began studying chamber music atStony Brook Pre-College division under the instruction of his chamber music coach Tomoko Fujita. At her request, he began attending Kinhaven Summer Music School where she was the cello instructor. There, he continued his studies on viola with Ken Kwo and Aundrey Mitchell. Lukas also participated in the New York Youth Symphony Chamber Music Program where he performedin masterclasses with Paul Neubauer, Alan Kay, Fred Sherry and many others. In the fall of 2015 he began studying at the Robert McDuffie Center for Strings under the tutelage of Rebecca Albers and Hsin-Yun Huang. While in school he has had the privilege to study chamber music with Annie Fullard and Lawrence Dutton. In addition to his Presidential scholarship at school, he has beenfortunate enough to receive fellowships from Manchester Music Festival, Dali String Quartet Festival, and Rome Chamber Music Festival. He has also had the opportunity to perform in masterclasses with the Calidore Quartet, Jupiter Quartet, Ehnes Quartet, Kim Kashkashian, Che-Yun Chen, Helen Callus, and Dimitri Murrath.