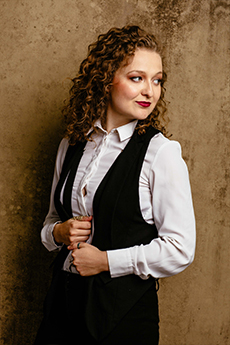 American mezzo-soprano Mary Rice is praised for her “fantastic coloratura” and “outstanding capacity as a physical actress.” Last season’s highlights included the role of Nerone in L’incoronazione di Poppea (BK Telemann Chamber Society) and Voice of the Water in the world premiere of Uncovered (City Lyric Opera, NY), and this spring she will perform in the Mary Trueman Art Song Competition finals concert. She has appeared as Hänsel in Hänsel und Gretel and Cherubino in Le nozze di Figaro, and she made her European debut at the Trentino Music Festival in the title role of L’enfant et les sortilèges. Her concert performances as alto soloist have included Vivaldi’s Gloria, the Mozart Requiem, and Handel’s Messiah among others. Her stage and musical theater work includes Puck in A Midsummer Night’s Dream, Macduff in Macbeth, and Symphony Space’s Broadway Premieres and Gala for Hal Prince.