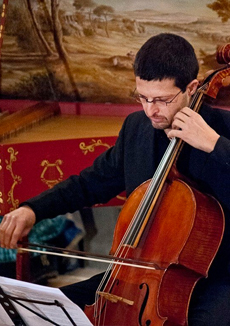 After having graduated in cello and chamber music from the  Conservatorio of Santa Cecilia of Rome, Scarpelli subsequently took a masters in ensemble music at the Accademia Nazionale of Santa Cecilia with Felix Ayo. He also took an advanced specialization degree at the  Accademia di Pescara and one in chamber music at the  Scuola Internazionale del Trio di Trieste, then continued perfecting his technique under the guidance of Rocco Filippini (Scuola d’Archi W. Staűfer of Cremona), Bruno Canino and Franco Mezzena. He has collaborated with important Italian and international orchestras (RAI di Roma e Torino, Scarlatti of Naples, Teatro dell’Opera di Roma, Sinfonica Abruzzese, Sinfonica di Sassari, Regionale del Lazio, Royal Symphony Orchestra of the Giordania Armed Forces): He often appears on radio and television programs for the RAI (Italian National Broadcasting) and has recorded for the Discoteca di Stato (Italy) and Radio Vaticana (Vatican Radio).

He has made many recordings for labels such as RCA, EMI, CGD, III Millennio, Stradivarius, Edipam, Bmg Ariola, Ed. Paoline, Musicaimmagine Records, Bongiovanni, Aliante, Splash Records, Sony, Naiveclassique and Progetto Imaie amongst others. His repertory reaches from the Baroque period to contemporary music, from film sound tracks to pop and rock. As a Baroque cellist he specialises in the repertory of the 17th and 18th centuries. He has recorded music for the film industry  with A. Trovajoli and E. Morricone, also playing solo cello.

In the pop music field he has played with the  Orchestra Ritmico-Sinfonica of RAI during various editions of the famous Italian Festival of Sanremo. Scarpelli has an intense program of concert performances for many major musical foundations and institutions worldwide (USA, Canada, Argentina, Mexico, Chile, Brazil, Jordan, Syria, Korea, China, France, Belgium, Germany, Switzerland, Spain, England, Holland, Greece, Ireland, Romania, Belarus, etc.) both as a solo artist and as a member of orchestras or chamber music ensembles.

He continues to collaborate with many prestigious chamber music ensembles amongst which we find the the likes of  Concerto Italiano or the Orchestra Roma Sinfonietta (conducted by E. Morricone).  He is a passionate teacher and holds the chair as cello professor at the Conservatorium  A. Casella of Aquila. He plays a George Chanot cello from 1870, a  Claude Lebet  Stradivarius cello and a George Aldric Baroque cello from 1860, according to occasion.