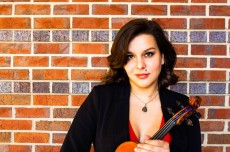 Cara Schlecker, twenty-two years old, a recent graduate of the Robert McDuffie Center for Strings, has participated in master classes with Ruggiero Ricci, Alice Schoenfeld, Shmuel Ashkinasi, Christopher O’Rile, Chee-Yun Kim, Robert McDuffie, the Emerson String Quartet, St. Lawrence String Quartet, the Brentano String Quartet, and Orion String Quartet. She made her Lincoln Center debut in 2012 and has performed at the Stanley Kaplan Penthouse. She has been featured on WFMT radio’s Introductions, and with the Robert McDuffie Center for Strings and was seen nationally on the PBS TV special, A Grand Mercer Christmas. Ms. Schlecker had the pleasure of playing with the Glendale and Macon Pops orchestras and this is her second year at the RCMF.