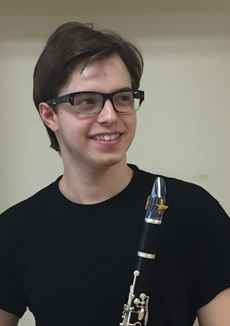 Michele Fabbrica studies at the B. Maderna Conservatory in Cesena with Piero Vincenti. In 2016 he performed at the Italian Clarinet Academy, at the 6th European Clarinet Festival of Camerino and as solo artist for the International Winds Ensemble of Cesena. He also served as first clarinet for the Teatro A. Bonci’s production of The Marriage of Figaro in Cesena. As first clarinet for the Italian Clarinet Consort, he has performed throughout Italy and in Europe, including appearances at Clarinet Fest 2015 in Madrid and the 2016 season of the Filarmonica di Trento. He also participated in the CD recording Tribute to Henghel Gualdi.